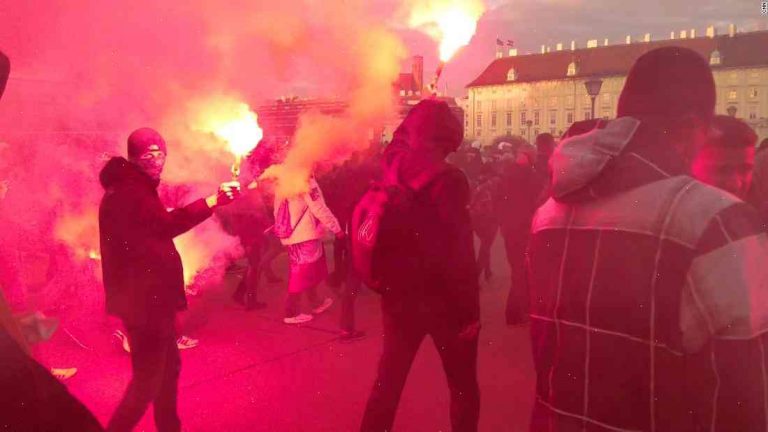 Police used tear gas and truncheons to disperse tens of thousands of demonstrators in Austria who were protesting against tougher restrictions on refugees.

Some waved Austrian flags as the march in Vienna was followed by carnival-style fireworks and burning effigies of President Alexander Van der Bellen.

The protest in Vienna came a day after thousands gathered in other cities for similar demonstrations.

Violence broke out as police broke up crowds after the demonstration in Austria’s capital.

The protesters, calling for tougher controls on asylum-seekers, wanted the new regulations scrapped.

Germany was among the first EU countries to introduce an emergency limit on refugees in 2015 as an increasing number of people seeking asylum arrived, sparking the largest refugee crisis Europe has experienced in decades.

President Van der Bellen warned that the change was putting tens of thousands of women and children at risk.

“This is unacceptable and criminal. It is an unfair and inhuman act that has violated a basic principle of every family,” he said.

Under the new rules, asylum-seekers must now prove they have a close family member in the country where they apply for asylum.

However, the Austrian authorities have offered to house and feed families for free but if any member of the family does not apply for asylum in Austria, the benefits are cancelled.

It was the latest show of political and public resistance against the new measures, which critics argue could disadvantage an already vulnerable group of people by causing them to lose their right to state aid.

Tens of thousands of people demonstrated in Vienna on Saturday, and police used tear gas and batons to disperse the crowds.

In Germany, rallies were planned in many cities – including in its main port city, Hamburg, and Stuttgart, in the south-west.

More than 1.6 million asylum seekers applied for asylum in Germany in 2015, before the country curbed the number of refugees and migrants it was willing to take in.

Austria took in 8,230 asylum seekers in 2015, about half the number recorded in Germany that year.

The order has been denounced by the UN refugee agency, UNHCR, and charities – many of whom insist that asylum-seekers should instead be accepted in countries such as Syria and Jordan.

The Man With the Strawball: Referee Stopped Angers-Bordeaux Match When Fan Threw Water Bottle Onto the Field