After the Taliban won the parliamentary election in the summer of 2015, Khalida Popal appeared on the Afghan presidential election campaign trail in her home district of Herat in the south. “Everyone was so… 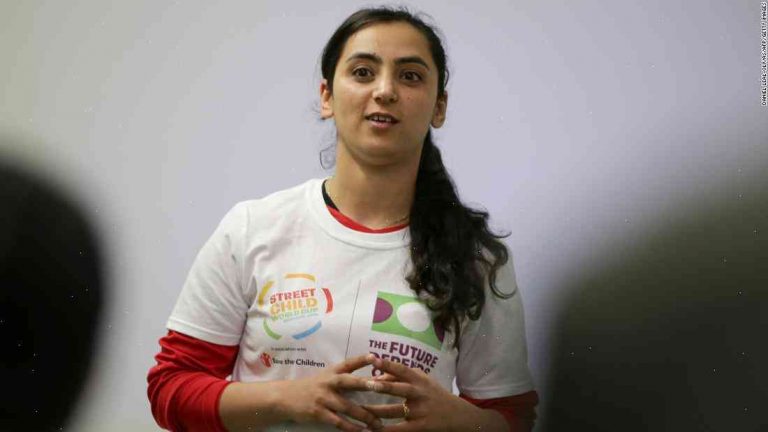 After the Taliban won the parliamentary election in the summer of 2015, Khalida Popal appeared on the Afghan presidential election campaign trail in her home district of Herat in the south. “Everyone was so happy about that victory,” the former Afghan footballer remembers. “But nobody asked whether the Taliban had won or not. Everyone was just very happy.”

Her parents had left Afghanistan after the Taliban took control of the country in 1996, leaving Popal, along with her two siblings, to live in refugee camps in Iran. Her parents initially had tried to remain in the country but they had been told repeatedly by government officials that they would be killed if they returned.

Khalida Popal in front of a statue of her father, Malang Popal, before the attack. Photograph: Human Rights Watch

The Taliban had taken over Popal’s city, breaking up her football team and forcing them to pay Taliban taxes of $1,000 a month. Her father had finally succeeded in escaping and she fled along with two friends. “People have left and I’m here [in Herat],” Popal told her father on the phone. “Where are you?”

The next day her parents were found dead in their home. “They were so poor that they didn’t have enough money to send them to the police station to report that they were killed,” says Popal.

Popal was forced to return to Iran, where she finally reintegrated with her family, but still never received the phone call telling her that her father was alive.

“He was alive for 25 years and they kept telling me he was dead,” she says, “but he was alive.”

In Romania, the truth about Roma people