Peru dumps last inhabitants of Amazon reserve, but will that destroy ecosystems?

This March 29, around 700 Peruvian scientists, veterans of a 30-year-old wildlife reserve, marked the end of an era in the Amazon. It was their last release of baby river turtles from the Restavek… 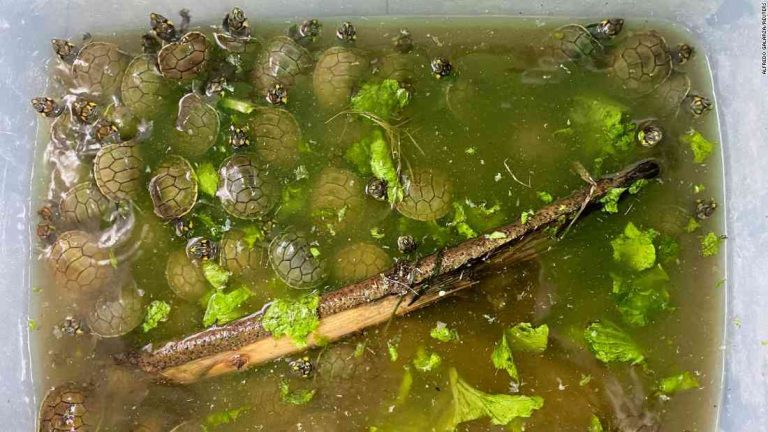 This March 29, around 700 Peruvian scientists, veterans of a 30-year-old wildlife reserve, marked the end of an era in the Amazon. It was their last release of baby river turtles from the Restavek Environmental Reserves, and they did so with a song and a dance.

In a ceremony punctuated by a bang of a tom-tom, 13 people dressed in pristine green caps and black boots were released into Peruvian rainforest to begin their new lives.

This year’s group included 500 baby river turtles. These are the last from Peru’s Restavek Environnetgrt, named after the nomadic peasants who farmed the reserve for many decades, and then were locked out by the government because of land disputes. As of July, that government ended its long relationship with the reserve and the last creatures in Restavek Environnetgrt—in the population that existed until the end of the month—lives among the odds.

Before this year’s release, every year since 1990, only adults would be released into the jungle. In the past, almost every released turtle was a helpless baby and very few had survived.

This year, in the rainforest’s aptly named next area of control, or COCU, researchers were able to assess newborns and track their health. “We saw that almost everyone has survived,” said Enrique Vaca, director of the COCU project. “There was a thriving population of newborns.”

After more than three decades in the jungle, some babies were still too young to identify numbers but knew they were part of the Chinchizi tribe, or umbrella tribe, that lives in the Chinchizi municipality in Peru’s Madre de Dios region. Told a story, this year’s newborns started to clap their hands.

Vaca said these newborns will continue to be tracked as they’re about to leave the reserve and start their lives.

Peru abandoned Restavek Environnetgrt and the Madre de Dios region in late April. At the time, a government official said Peru’s legal situation had become unsustainable. Restavek Environnetgrt is on a list of special geographic places under threat—all Indian reservations—and Peru doesn’t have enough trust in indigenous tribes to hold discussions with them.

Peru is terminating Restavek Environnetgrt after declaring the Madre de Dios region “free from threat” and the government has presented an environmental bill to Congress that reduces Indians’ responsibility in managing the reserve to resolving land-use disputes.

There are no safeguards to guarantee that the new laws won’t be used to move other endangered populations into the reserve. The Madre de Dios region is a hotbed of protected species, including jaguars, tapirs, green monkeys and bats.

Right now, families in Madre de Dios decide when new populations move into the reserve. Vaca said many Peruvians don’t understand that it’s natural for communities to decide when a new population moves into a reserve and that Peru is eliminating the opportunity for Peruvians to play a role in this decision.

Vaca worries that without Peruvians’ input, there could be a cascade of “predators of biodiversity”—even more animals being killed and eaten, more large predators, including large fish and crocodiles.

“They really didn’t consult with the most vulnerable groups, the indigenous groups, in the whole process,” Vaca said.

Sick of Regulations? Here’s What Can Be