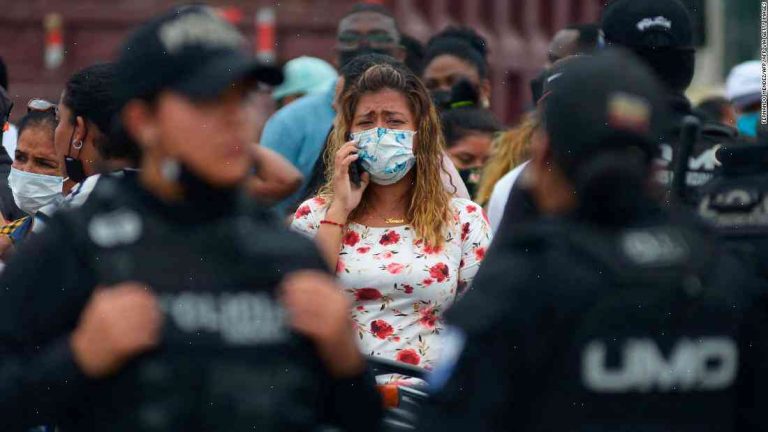 Bodies have been identified from 30 inmates and guards killed in a riot at an Ecuadorian prison, officials say.

Inmates from the Rafael Sarapiqui II prison in Ecuador’s capital, Quito, went on the rampage, setting furniture on fire and assaulting guards.

Officials say one of the most seriously injured inmates died as he was being transferred to a hospital.

Twenty-six inmates and eight guards have been killed so far.

Justice Minister Thomas Santos said the authorities hoped to have all the bodies identified and recovered before being buried.

“There are still many bodies to be recovered. This is not a small episode,” he told the radio station La Cuesta.

“I would like to ask our neighbours for their help.”

In addition to the 23 dead, six inmates were severely injured, he said.

The riot started when around a dozen prisoners wearing black masks and wielding knives and baseball bats attacked guards in the prison’s control room, according to a video filmed by an officer inside the building.

AP correspondent Ben Davis, who is at the prison, reported that 50 inmates were demanding to be transferred to a military prison, and started attacking staff.

He said other inmates who were shot had managed to flee to a nearby chapel, where they were hiding out.

As they became increasingly violent, the authorities ended the revolt and managed to isolate the inmates who had attacked the guards, Mr Davis said.

Prison violence and clashes between security forces and inmates are not uncommon in Ecuador, which has about 6,000 places in adult prisons, many of which are overcrowded.

In February, more than 100 inmates were killed in clashes between government forces and gunmen at a prison in Guayaquil, the capital of Ecuador’s oil-rich Pacific coastal province.